Male infertility is the most common reason couples in the UK have IVF treatment, official UK data has revealed.

According to the Human Fertilisation and Embryology Authority, the UK’s independent regulator of fertility treatment and research using human embryos, the most common reasons for IVF treatment being carried out are male infertility (37%),  unexplained infertility (32%), an ovulatory disorder (13%), tubal disease (12%) and endometriosis (6%). 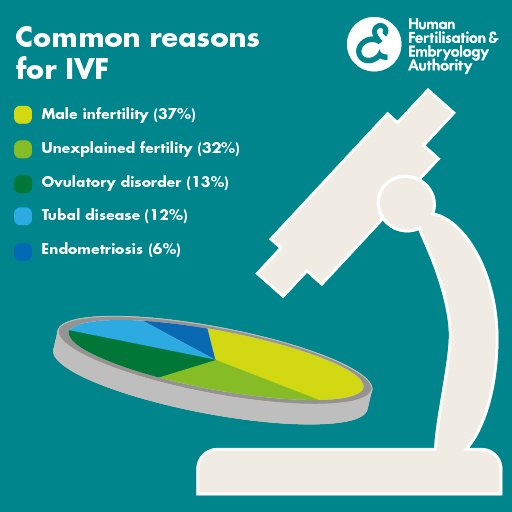 The HFEA’s report for 2014-2016 showed that 40 years after the first child was born following in vitro fertilisation, IVF treatment is at the strongest it has ever been. The report revealed that in 2016, more than 68,000 IVF treatments were performed (an increase of 4% from the previous year), with over 20,000 babies born and current treatments are now 85% more likely to succeed than when records began in 1991.

“Assisted reproduction has come a long way in the 40 years since British doctors pioneered IVF with the birth of Louise Brown,” said Sally Cheshire, chair of the HFEA. “With well over a million treatments performed in the UK since records began, and more than 300,000 babies born, as a country we remain at the forefront of fertility treatment”, she added.

Age remains the most important factor for a successful fertility treatment. The average birth rate for women of all ages is 21%, while women under 35 have a 29% chance of a successful birth.

Other findings included the number of cycles using eggs frozen for later treatment rose by 10% in the last recorded year, with 1,170 freezing cycles in 2016. The age profile for women having egg thaw cycles is very different from standard IVF treatment, with the largest group aged over 44 (27%). Only 17% of patients using thawed eggs in treatment were aged under 35.

The science experiment of trying to have a baby